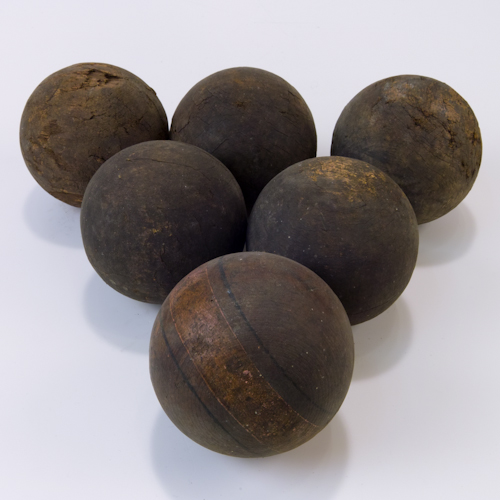 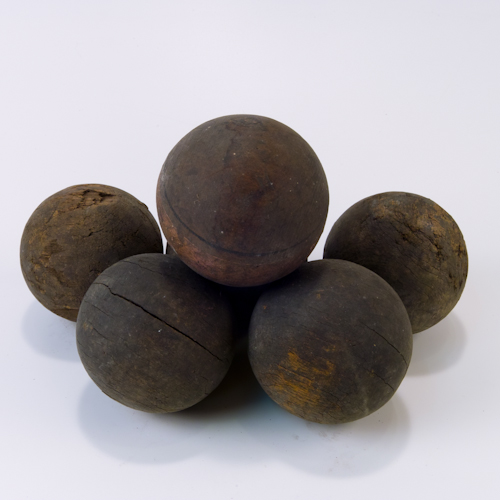 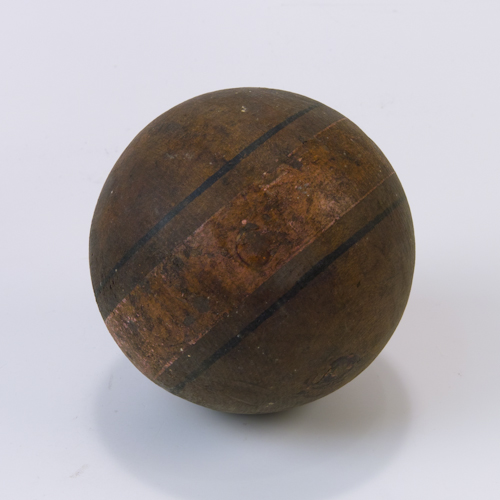 This collection of six wooden croquete balls are over 100 years old. They came from the home of one of the founders of a local community, never married, she grew old and passed away in the home in which she grew up. Little that came into the large old house ever left although she was neat as a pin. We decided not to clean them, they have been cloaked in the same original soil and wear for the two decades we have had them. We have had fun using them in historic displays and photographs.
Measurements: 3.5″ diameter 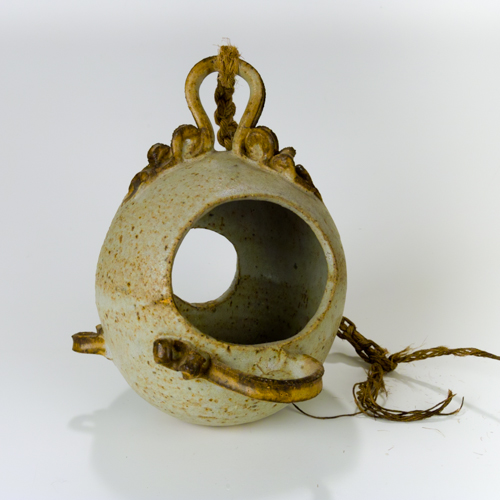 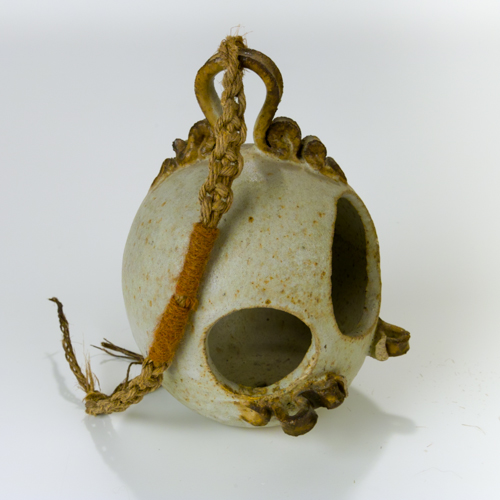 Here is a bird feeder that shows its age. Out of a collection of family objects from the 70s, the macrame and hand thrown glazed ceramic bird feeder would be perfect for smaller chickadees, titmouse, or finches. Suspend it from the macrame, on the slip fused clay decoration on the top, or replace with your own creation or a simple, non-corrosive wire rope holder. Place the seed inside and watch the birds sit on the perches and pick their favorite seeds from the mixture. One larger perch is on one side, it appears there may have been a second larger perch that is no longer there but, the pieces that are fused to the body of the feeder still allow for use by smaller species. 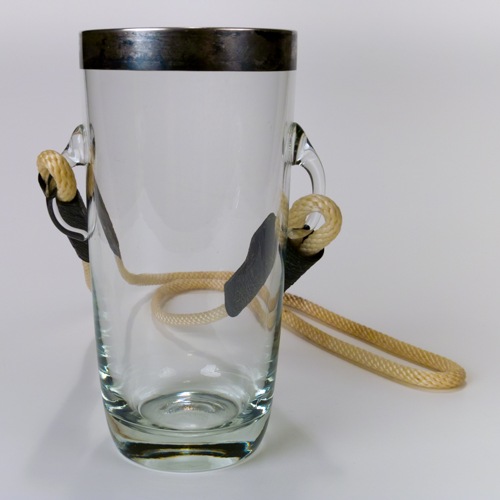 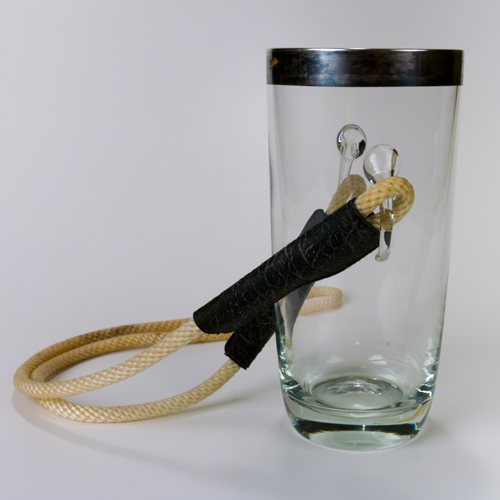 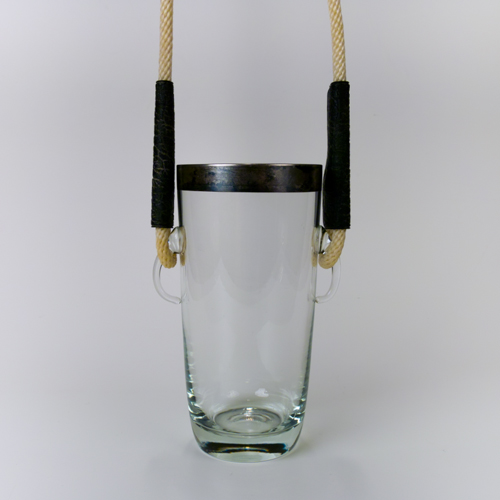 Feel free to roam at parties, festivals, and tasting events with this vintage handblown drinking glass. It is worn over the neck, suspended by a woven lanyard. Among family treasures and oddities, we believe it was purchased in Europe during a fall touring event in the early 70s. The handblown glass design has a Northern European or Danish influence. The mouth or lip of the glass is encircled or laced with a silver treatment in which one small area shows wear. The lacing of a glass, particularly a beer glass, not only celebrates the value of the amber contents but serves to capture the foam and its volatiles for enhanced enjoyment. 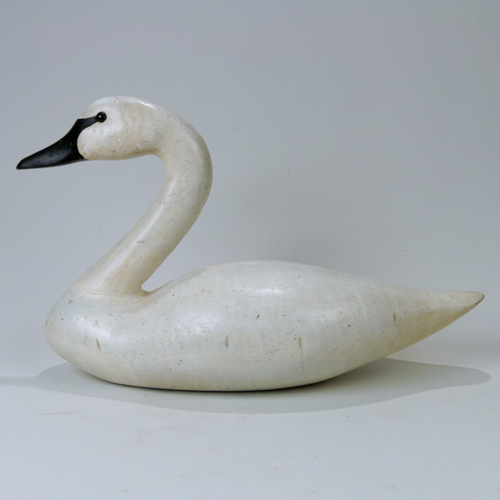 This beautiful swan was originally purchased at an outdoor antique festival in Kentucky in the early 90s. I don’t believe it was represented as an antique, but as a replica. It is not carved of wood but some man made substance, although that seems insignificant for display purposes. The sculpted form and matte painted finish are beautiful and give it an authentic look without the cost or potential for burrowing insects, or deterioration. 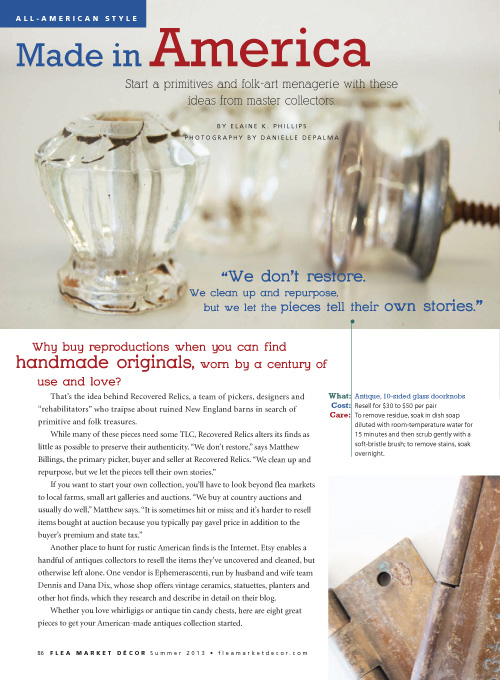 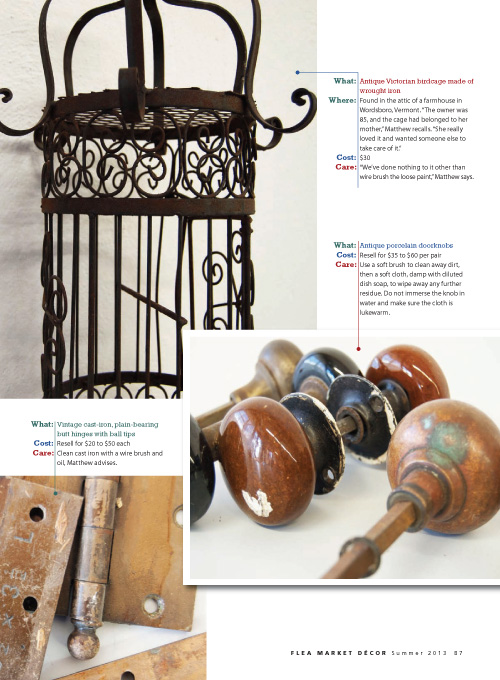 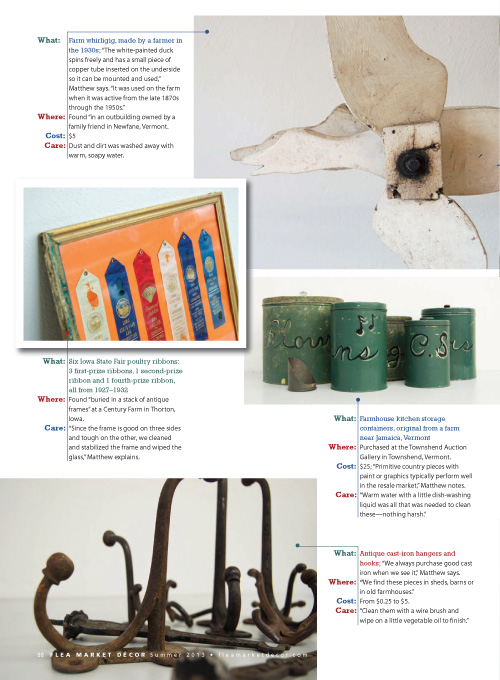 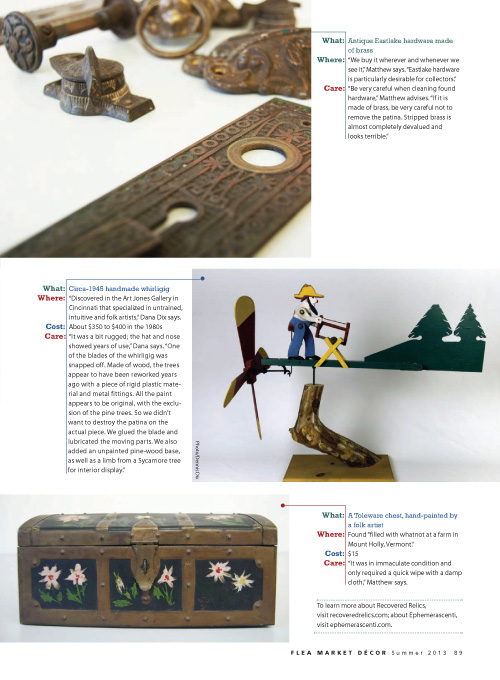 Our new favorite publications are Flea Market Decor magazine and engagedmediamags! The magazine celebrates personal style with discoveries made at auctions, thrift stores, flea markets, galleries, … and attics! Not only do they spot and interpret collecting trends, but provide regional sources, as well as the how, essential to the upcycling and DIY process. I may not have discovered this tasteful, clever and creative resource on my own. We were contacted by the magazine regarding a whirligig they discovered at our online store Ephemerascenti at Etsy while researching for their article titled “Made in America.” The magazine is a treasure trove of inspiring insights and ideas for anyone regardless of budget, style, or a simple desire to transform what already exists. I hope you enjoy the article, but suggest you check your news stand for the Summer 2013 edition of the magazine. 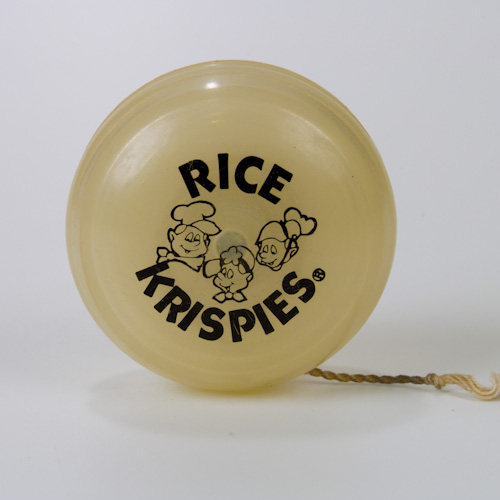 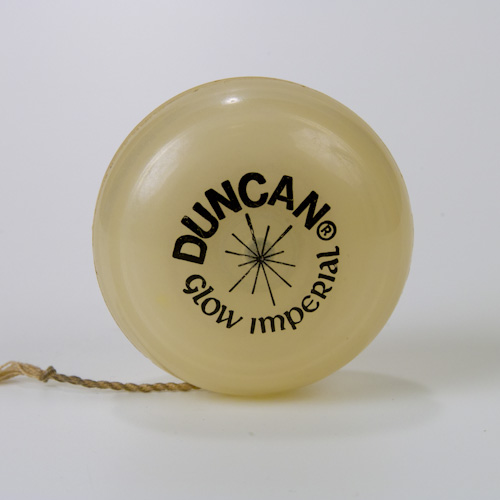 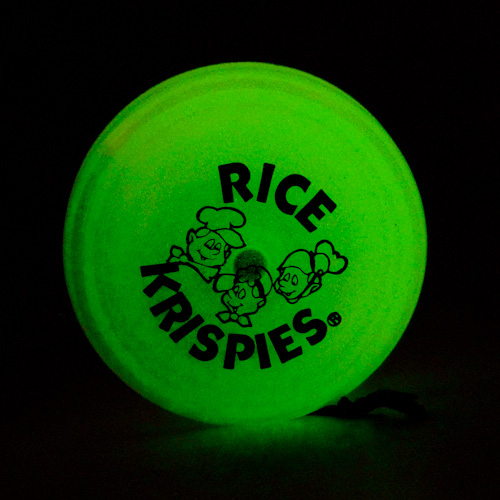 This vintage yo yo is in excellent condition, rarely, if ever used. This was a promotional or advertising specialty yo yo produced in 1989 for a limited time. a must have for yo yo collectors as well as collectors who specialize in “glow in the dark” objects. 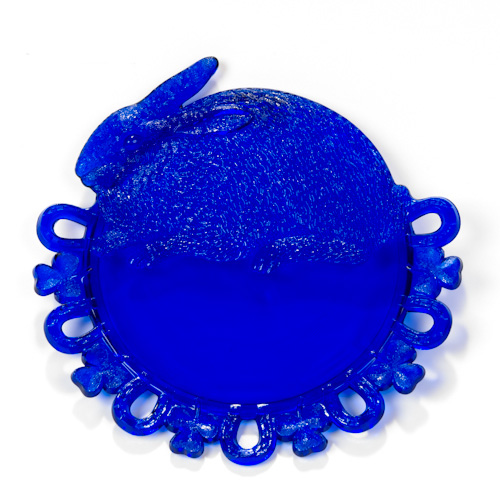 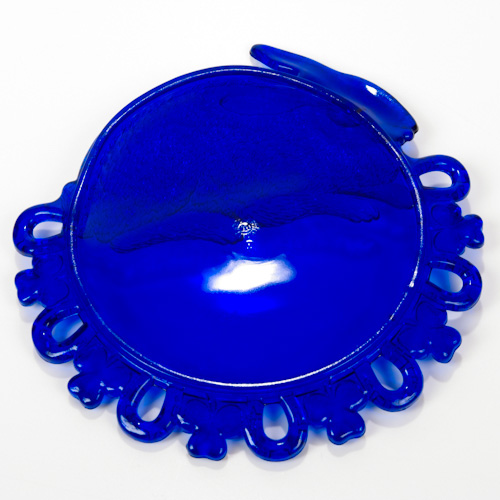 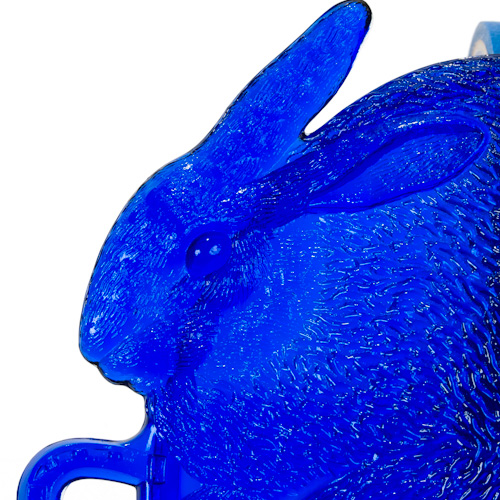 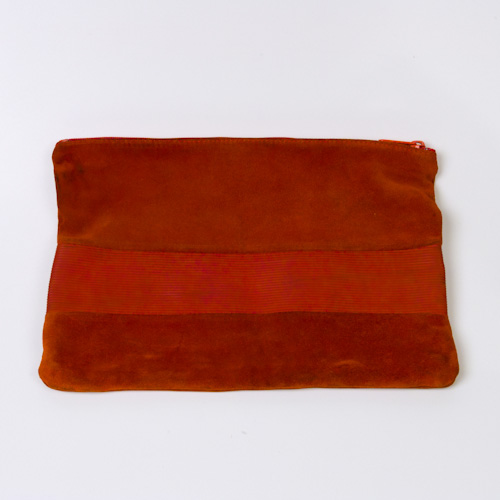 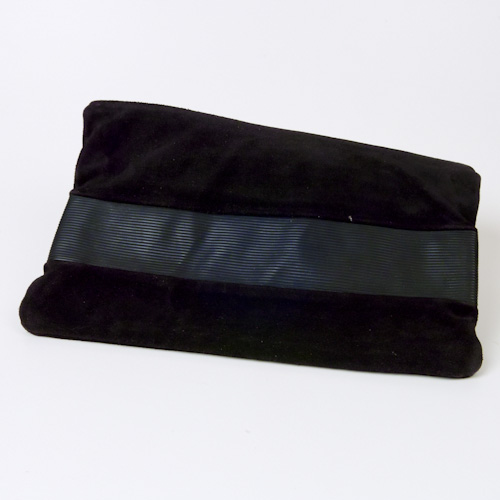 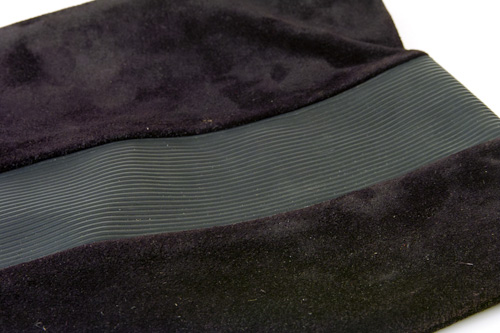 These non-constructed black and red suede and rubber zippered clutch purses with label inside which reads “Jeffrey Lawrence for Lawrence Bentley, Italy” was made in the 80s. It is in very good vintage condition. Perfectly clean inside and out, there are no traces of use, particularly on the inside. A current 2013 trend in fashion, a clutch this size accommodates most personal and mobile communication necessities.