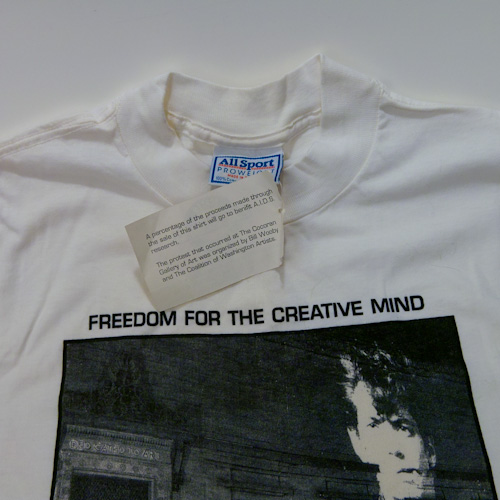 This t-shirt represents a “catalytic incident” which over twenty years ago still bears import within the art world if not our culture. The first time we experienced an exhibit devoted solely to the work of the late artist, photographer Robert Mapplethorpe was in 1978 in Washington, at the Harry Lund Gallery. The Lund Gallery specialized exclusively in photography and was located around the block from the J. Edgar Hoover Building which houses the F.B.I. That night’s show and the cast of characters, including Mapplethorpe himself, produced irony related to personal freedom and civil liberties but was not fully apparent until years later. Living in Cincinnati, in October 1990, we viewed the controversial exhibit titled Robert Mapplethorpe: The Perfect Moment. The exhibit had begun its tour over a year prior amid controversy including cancellation of the exhibition at The Corcoran Art Gallery in Washington. The show was canceled however the shows images were projected on to the building in protest.

Seven of the artist’s images being shown at the 1990 show at the Contemporary Art Center became the subject of a trial in which, then Director of the facility, Dennis Barrie, was on trial for pandering what were being deemed obscene materials. The trial pitted liberal and conservative values in the city where we, among many, demonstrated on the steps of the county courthouse; where the six month long case proceedings were later dismissed. The Perfect Moment symbolized the beginning of a war of cultures still occurring years later particularly as it relates to public funding for the arts.

This XL t-shirt reads “FREEDOM FOR THE CREATIVE MIND” and documents the evening of June 30, 1989 where “protestors gather outside the Corcoran Gallery of Art to protest its cancellation of the Robert Mapplethorpe exhibit. THE PROTEST CONTINUES… ”

The shirt printed by International Graphics Screen Printing was purchased at The Corcoran. The back of the tag reads: A percentage of the proceeds made through the sale of this shirt will go to benifit (spelling error) A.I.D.S research. The protest that occurred at The Corcoran Gallery of Art was organized by Bill Wooby and the Coalition of Washington Artists.” The shirt has never been worn, the tags are still on it. It has a hole approximately 1.25″ along the back side of the left arm, a sewing flaw during the manufacturing process (which could be repaired.) The shirt is clean, bright white, no yellowing, the screen print is still clear… as is the message.