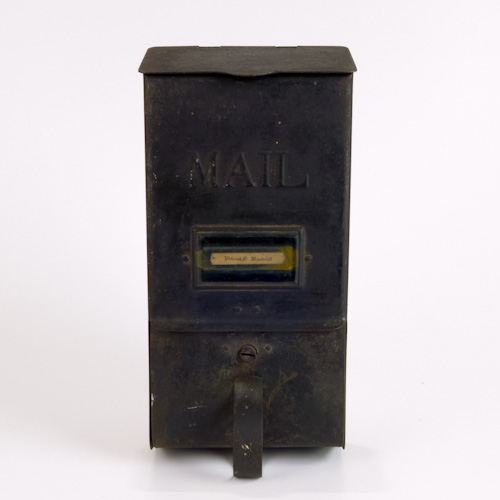 This tasteful, historic painted steel Corbin Cabinet Lock Company, wall mount, mailbox still has the original coat of black paint. The embossed markings reading “Corbin Cabinet Lock Company New Britain, Connecticut, USA” are still legible in the steel. The company was started there by Philip Corbin in 1882. The owner and his company were quite respected and successful through their history. He was elected not only to the State Legislature in 1884, but he also became a member of the State Senate in 1888. The P & F Corbin Cabinet Lock Company later merged and became the American Hardware Corporation. In 1989, Black and Decker purchased the company, and in 2010, the Stanley Works, also of New Britain, Connecticut purchased Black and Decker and is now called Stanley Black and Decker.

This mailbox has become separated from the key to its lock, but fortunately, it remains in the unlocked position, allowing for all other functions. The mailbox has a bit of surface rust on the back which has not changed in the 20 years it has been in our possession, it is in otherwise very good condition, see photos.The circular and paper holder still has its original shape and “spring.” The mail opening has a decorative saw tooth design and the original prism cut glass still holds in place the typed name of the last resident which reads “Vincent O. Woodruff.” This would make a wonderful period piece for a movie set from the 30s through the 50s.