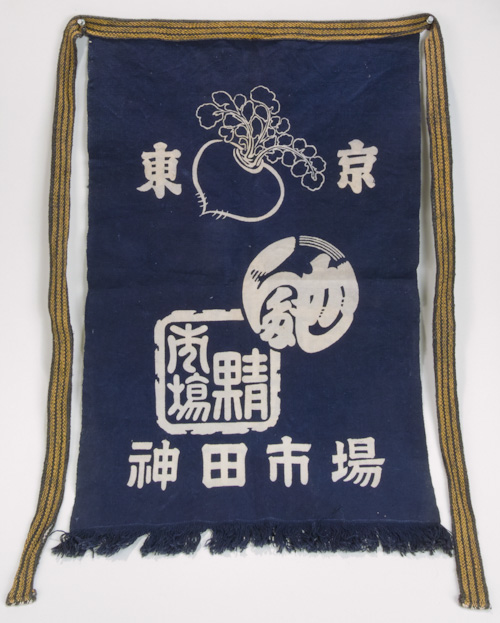 Trade in your apron for a maekake! The maekake is a traditional apron that has been used for centuries as part of the uniform of Japanese workers. Mostly men, they were used by merchants, craftsmen, factory workers. Think miso factories, soy sauce factories, factories that made products, bottling companies, …. Practical, they protected the workers clothing beneath, but moreover, their legs and shins. Printed on the maekake (pronounced: ma-eh-ka-keh) was either the name of the factory or the shop, as advertisement. For smaller shop keepers who could not afford custom printing, a graphic representation of product, for instance flowers for a florist, vegetables for a vegetable market; in place of the brand of a sake, beer or other factory in which many workers would be employed and require a branded maekake as part of their uniform.

A recent trend in Japan has made the traditional maekake a stylish, modern component of fashionable dressing for men and women outside of the corporate business environment. This is expressed as “iki” or Edo stylishness. The maekake were and still are made of sturdy cotton or cotton linen mix. The fabric would be dyed in a deep indigo blue hue using traditional indigo. The traditional prints using Japanese glyphs and designs are always white against the indigo blue. The graphic qualities of maekake are gaining in popularity with the younger generation interested in style and design with a modern mix of tradition.