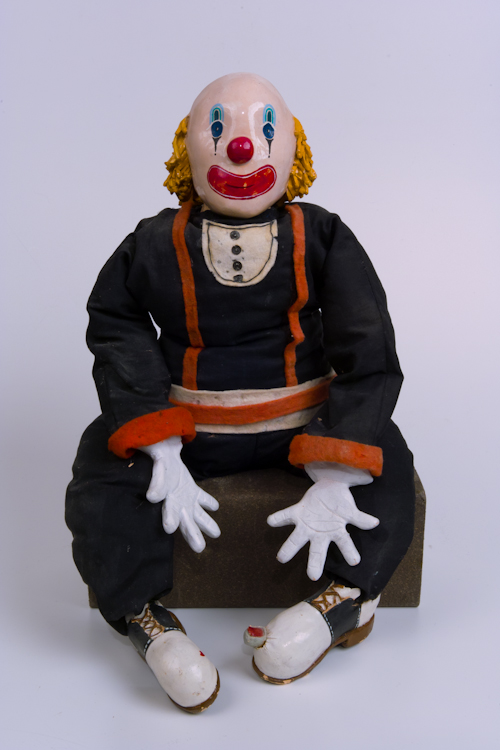 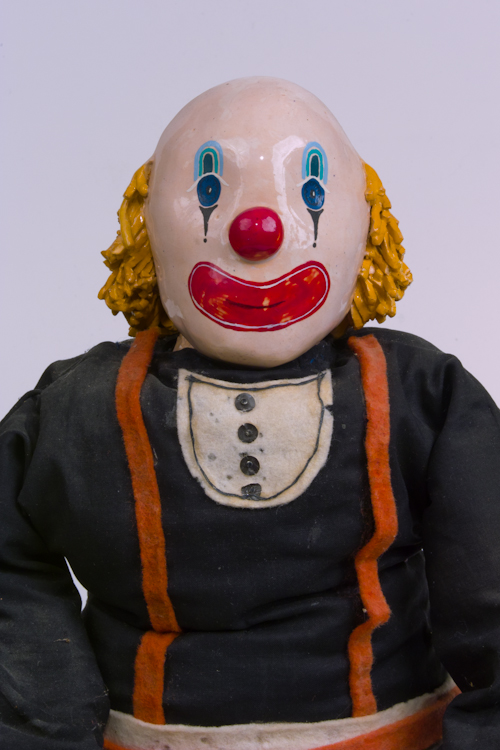 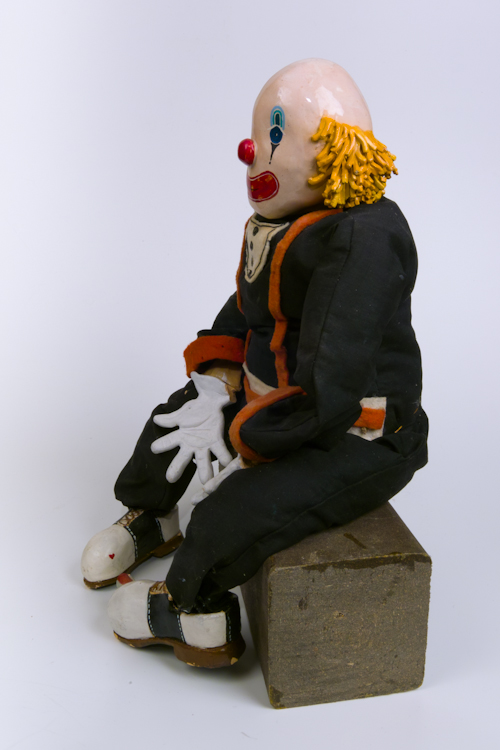 This very unusual, and very well made, handmade clown who was lovingly made down to the small red heart in the glaze on one of its two ceramic saddle shoes. The details are endearing. He was made with a flexible metal armiture enabling movement of arms, legs . He is cushy, soft with the exception of the ceramic details. The head, hands, and shoes with a lone big toe sticking out are fired, and glazed ceramic. His fine hair looks like it was pressed through a ricer or similar extruding device. His clothing is made of fabric and felt with internal stuffing. He is very clean, with ony a few nicks in the glaze on the soles of his shoes. A friend gave him to us in the late 90s when she was down sizing, to include in our large figurative collection. 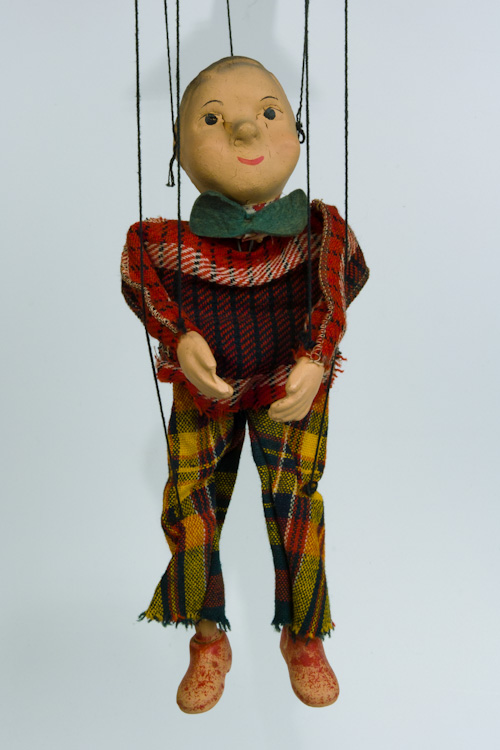 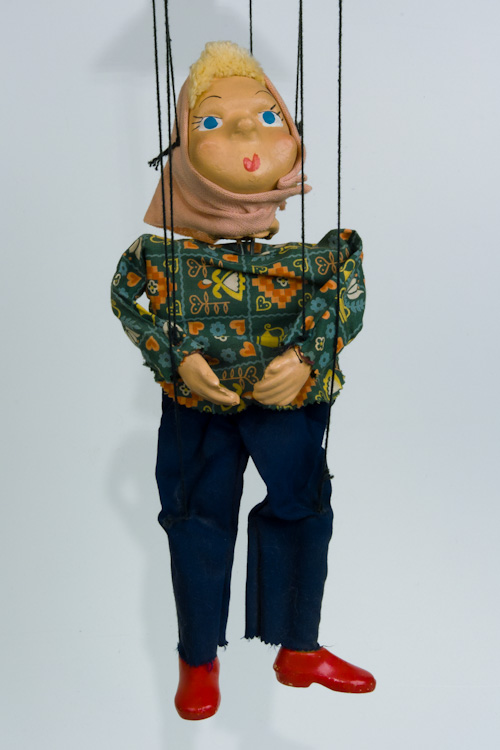 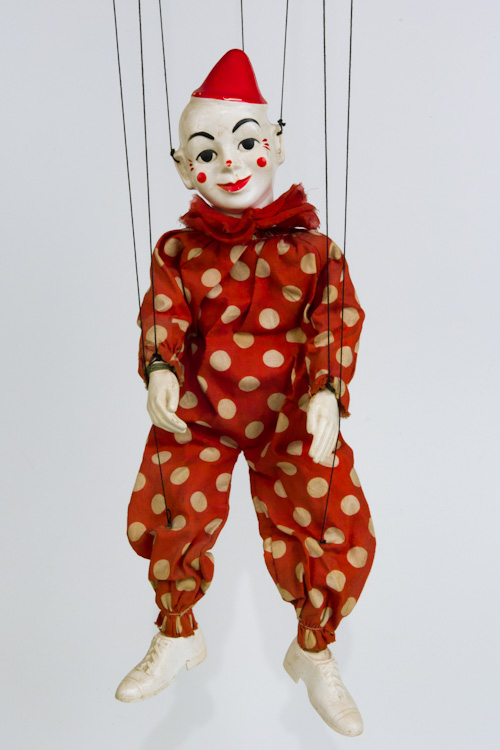 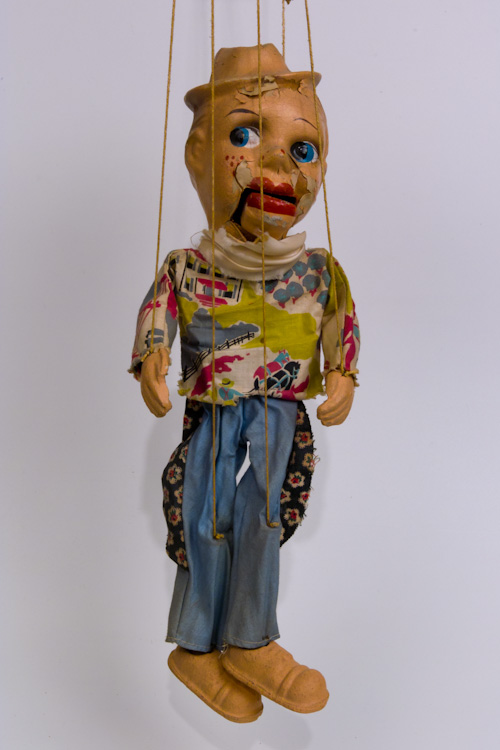 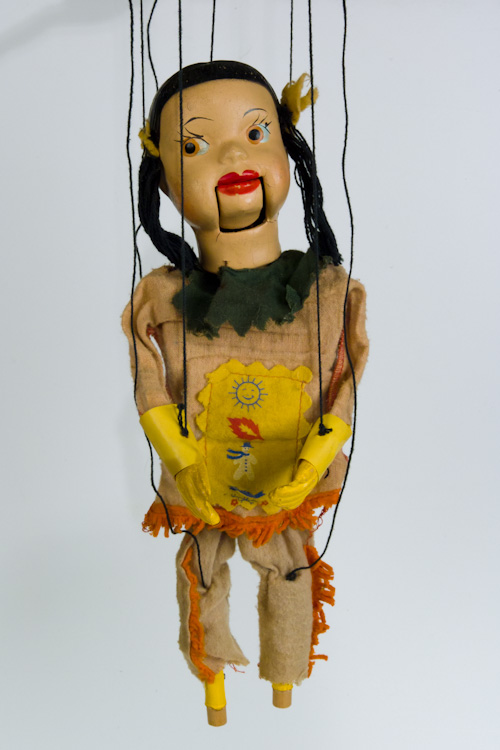 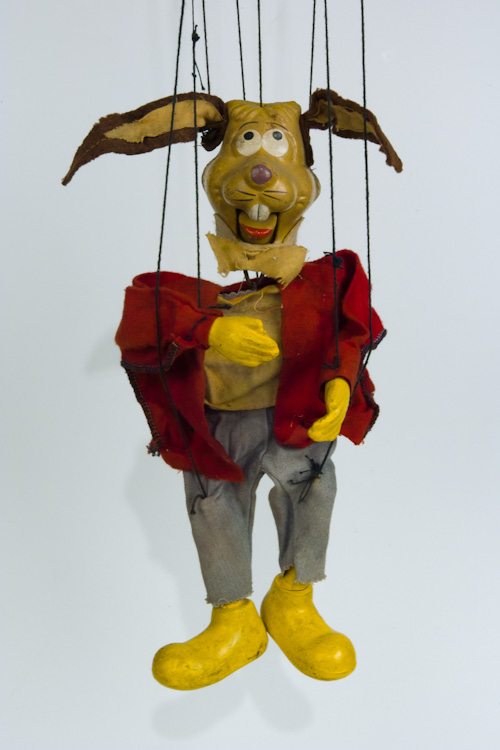 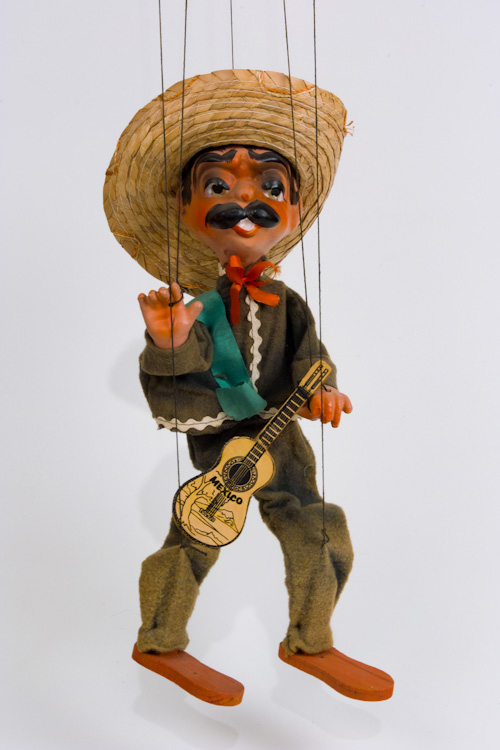 Our collective eye is focused not only on decorative and functional mid-century and modern objects, but figural representations conveyed in myriad genre of period, style, and media. Handmade limber jacks and jointed handmade “dolls” are examples, as well as marionettes and string puppets made and marketed for a wider baby boomer audience in the late 40s into the 1950s as yet another slice of the American Pie. It was common for public schools to have extra curricular events in which puppet shows took center stage. Companies such as Hazelle Popular Marionettes, the Peter Puppet Company, Pelham, and Gund produced individual puppets and collections linked to animate and inanimate characters popularized on early television. The best known early example, the western and circus themed “Howdy Doody Show” that was aired between 1947 and 1960 with Buffalo Bob, played by Bob Smith. The show included a cast of actors and their on stage characters, that would become household names in their own right, and the puppets including, of course, Howdy Doody, Princess Summerfall Winterspring, Chief Thunderthud, …. Another manufacturer Hazelle Marionettes utilized rigid, molded plastic for Mario, Teto, and their other “Popular Marionettes.” They also developed the “airplane control” which was constructed using two pieces of wood which could be conjoined or separated for a wider range of manipulation of the character’s limbs. The Peter Puppet Playthings Company developed Peter and Patty the Skating Puppets combining the control of arm and leg movement while the puppets were on rolling miniaturized skates. The personality that is conveyed in each facial expression, the fabric from which their outfits were sewn, the graphics on the packaging are among factors that contribute to string puppets and marionette’s appeal from a collectors perspective.